Death In The Sickroom, the most recent addition to the Reekus Records roster, are a four-piece band from Dublin who play a superb brand of 12-string jangle pop.

Formed in mid-2012, they’ve been making quite a name for themselves on the capital’s live music circuit: “They have a sound unlike any other band around at the moment. Really worth seeing live if you get the opportunity” (Barry Gruff).

Nineteen-year-old Mark Heffernan’s lyrical content is reminiscent of the beautifully inspiring kitchen-sink romanticism of Suede, The Smiths and Pulp, combining themes of sex, violence and isolation with infectiously catchy melodies and well-crafted tunes.

The lyrical maturity and songwriting ability, evident in songs like Tonight and Brick to the Face, certainly belies their young years – the former was described as “the sparkling indie brilliance of Echo & The Bunnymen at their very best” (Barry Gruff).

Others wrote how Death In The Sickroom “offer up some excellently crafted jangle-pop” (Trevor Meyer: Blahblahblah Science) and are a “a cross between Echo & The Bunnymen , The Cure and The Smiths! Sweet moving songs with delicious dancing parts and wonderful harmonies. The melodies are so beautiful that your heart will be totally charmed! Makes me feel good and happy!” (The HC/Punk Demo Tapes Archive). Goldenplec also thought they were “hugely enjoyable” at Hard Working Class Heroes (David Dooley).
Tonight (below) is the new single by Death In The Sickroom. It will be released on 4th July on Reekus Records.
The video was directed and edited by Gansee Films.

Tonight is the lead single from their forthcoming Brick To The Face EP, due out in August.

Give ‘em a listen on either their Breaking Tunes and Bandcamp pages and see for yourself why they’re one of the most promising acts around.

Death In The Sickroom are: 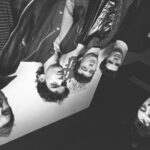 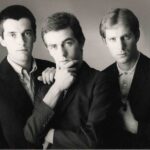